Elise Mertens and Aryna Sabalenka made it 2-for-2 in Grand Slam finals. The No.2 seeds defeated Barbora Krejcikova and Katerina Siniakova on Friday with a 6-2, 6-3 win to capture the 2021 Australian Open women's doubles championship.

"We had a really good couple of weeks," Mertens said after she and Sabalenka of Belarus added another Grand Slam title to go alongside their 2019 US Open trophy. "We had a tough draw actually in doubles, so we're really happy that we pulled through. Some days, yeah, like today, we just kept on fighting."

Mertens and Sabalenka pulled through a number of close games in the 79-minute win against the No.3 seeds, fending off 10 of 11 break points. Mertens was the only player on court to not drop serve as she and Sabalenka captured their fifth career doubles title as a tandem and improved their team record to 48-15.

For the two Top 20 singles players, both of whom have a title this season (Sabalenka, Abu Dhabi; Mertens, Gippsland Trophy), the doubles court proved to be a relaxing atmosphere. They smiled and laughed throughout the match and collected their trophy with their signature jump, as they had in Flushing Meadows 18 months ago.

"I think it's good not to be all stressy all the time," Mertens said. "We have singles, and that is pretty stressy already. Then we have doubles, so we try to make it fun. But, of course, when we're on court, we want to win."

Added Sabalenka: "From my side, I would say I was pretty relaxed on doubles. I was doing whatever I want to."

Mertens laughed in response. "She didn't care about me!"

Their victory in the championship match served as a bittersweet capper to the event. Mertens and Sabalenka do not plan to play this season's remaining Grand Slam events together. (They are, however, planning to play some of this year's WTA events, including Dubai and Miami.)

"For sure I like to play doubles," Sabalenka said. "I just want to try something else. But I hope if one day I make a decision to come back in doubles, I have this girl over here for me."

Said Mertens: "I just like to play matches. But, yeah, I mean, she can definitely try and we'll see. If she still likes to play doubles, I'm here."

Three straight breaks in the middle of the opening set resulted in a 4-2 lead for Mertens and Sabalenka. The powerful shots from Sabalenka were ably matched by the pinpoint hitting from Mertens. A pivotal service game by Mertens, where she withstood four break points, was punctuated by an overhead winner by Sabalenka, stopping the string of breaks and moving that team to 5-2.

Serving to stay in the set, Siniakova fired three double faults, including on the final two points, to cede the one-set lead to Mertens and Sabalenka. Siniakova had six double faults overall in the opening set.

The Czechs were unable to break Mertens and Sabalenka in the second set. Their forecourt ferocity was less crisp than usual. The Belgian/Belarusian pair were allowed to maintain control with sturdy groundstrokes, and after seven straight service holds in the set, a strong service return by Sabalenka gave her squad the decisive break, at 5-3.

A marathon game followed on Sabalenka’s serve, where miscues at net saw her team squander three championship points and face three break points. But an ace by Sabalenka brought up match point No. 4, and on that occasion, a Siniakova backhand flew wide, sending the trophy into the waiting arms of Mertens and Sabalenka.

"I knew she can do it with her serve," Mertens said, smiling. "It's like, I'll just stand at the net." 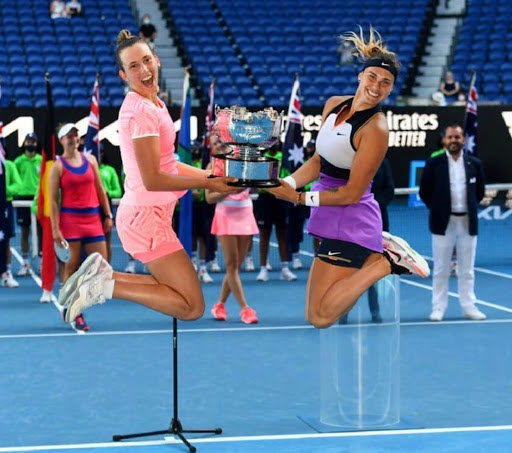