Unseeded Elise Mertens and Aryna Sabalenka cruised to their first title as a duo at the BNP Paribas Open, defeating top seeds Barbora Krejcikova and Katerina Siniakova in straight sets.

After just their second tournament together, Elise Mertens and Aryna Sabalenka are Premier Mandatory champions.

The unseeded Belgian and Belarusian duo rolled to their first career title as a team at the BNP Paribas Open on Saturday, defeating reigning Roland Garros and Wimbledon champions, and top seeds, Katerina Siniakova and Barbora Krejcikova, 6-3, 6-2.

Mertens and Sabalenka avenged a third-round Australian Open defeat to the Czechs from January, which was their lone loss as a pair to date, with the win.

"I think that was on our mind, but not really the result," Mertens said. "We were there as one team, and it came out great.

Yeah, I think...it clicks. [We were] both aggressive on the net. It was a really good match.

"In Australia we still had to figure things out, first time together and already playing three sets against those top seeds. I mean, I really felt there is really potential, us in a doubles team."

In Melbourne, they led the top seeds by a set only to lose in a thrilling three-setter, but in the California desert, they allowed the Czechs no such comeback.

Despite a shaky start for Sabalenka on serve, as she served four double faults in her first two service games, the duo won the last three games of the first set from 3-3, and the last four from 2-2 in the second set, to seal their first triumph.

The unseeded duo was clutch on the biggest points in the second set, saving all six break points they faced and serving four combined aces.

"I think that we were playing quick and don't really give opponents time to do anything," Sabalenka said.

"In Australian Open, it was learning each other. And now we are, like, 'Okay, so she's doing this. I'm doing this,' so we are good."

Added Mertens: "I think we don't make really easy mistakes, especially serving and returning was very important because in the rally, they can do a lot of things. They can come to the net, go with the volleys. I think we really played aggressive, those two shots."

The week overall saw Mertens and Sabalenka knock out three seeded teams, which included a first round upset of No.2 seeds Timea Babos and Kristina Mladenovic and a semifinal victory over No.5 seeds Gabriela Dabrowski and Xu Yi-fan.

The two singles stars have plans to play together at next week's Miami Open, but after that, they're looking to save their best for the biggest stages.

"Just one day, we decided to try to play with each other. It worked really well in Australian Open. Now we are going to keep going in the big tournaments," Sabalenka said.

"[We're] just enjoying it there, enjoying practicing returns, serves, volleys. No pressure on us. It's different. Different emotions, [and it's] good to have one more trophy in your collection."

"It's fun. There is no pressure," Mertens added. "And we try to improve ourselves as a singles player, as a doubles player, too." 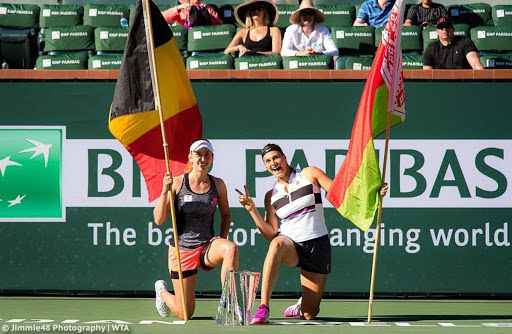