It’s a Sunshine Double for Elise Mertens and Aryna Sabalenka.

The unseeded duo polished off their perfect 10-0 month of March with a 7-6(5), 6-2 victory over No.6 seeds and Australian Open champions Samantha Stosur and Zhang Shuai to win the Miami Open title on Sunday, two weeks after they claimed the BNP Paribas Open title in Indian Wells.

Even against the only Grand Slam-winning pair of the season so far, Mertens and Sabalenka were impenetrable, earning a hard-fought first set before easing to the straight-set win after an hour and 24 minutes of play.

Mertens and Sabalenka become the fifth team to pull off the Indian Wells/Miami ‘Sunshine Double,’ and the first since Martina Hingis and Sania Mirza in 2015.

It has been a dizzying run into the elite group of doubles teams for Mertens and Sabalenka, who paired up for the first time in a run to the round of 16 at this year’s Australian Open. Since their loss to No.1 team Barbora Krejcikova and Katerina Siniakova in Melbourne, the Belgian/Belarusian pair have not lost a match in just their second and third events together.

Mertens and Sabalenka started off the encounter by stealing the first game out from under Stosur’s nose, as the Australian squandered a 40-0 lead to drop serve with a double fault and a forehand error in the last two points of the game. The unseeded pair did not face a break point until 4-3, when Sabalenka blasted a putaway on deciding point to hold for 5-3.

Volley wizardry from Zhang allowed her team to fend off two set points on Stosur’s serve to hold for 5-4. Stosur then found the range on her service return, crushing multiple winners when returning the Sabalenka delivery as the Belarusian served for the set. Stosur and Zhang used that to break back for 5-5, and give themselves new life.

It was then Mertens’ turn to save two set points on her serve at 6-5, as the aggression of Sabalenka at net pulled them into the tiebreak. In the breaker, lob winners by each of Mertens and Sabalenka put them ahead 5-3, and though a double fault by Sabalenka at 6-4 erased another set point, an error-forcing backhand by Mertens clinched the opening frame.

The second set had a similar start, as Mertens and Sabalenka clinched the early break advantage, taking Stosur’s serve to lead 2-0 after Zhang missed an overhead. But Stosur and Zhang pulled back on serve from an 0-3 deficit, as the Australian punched a volley square on the baseline on deciding point to break Mertens and pull to 3-2.

But that would be the last hurrah for Stosur and Zhang, as Mertens and Sabalenka used the putaways of the Belgian and the groundstrokes of the Belarusian to overwhelm their opponents down the stretch. The eventual victors broke Stosur and Zhang back-to-back en route to claiming the final three games, as the match ended with a Zhang double fault. 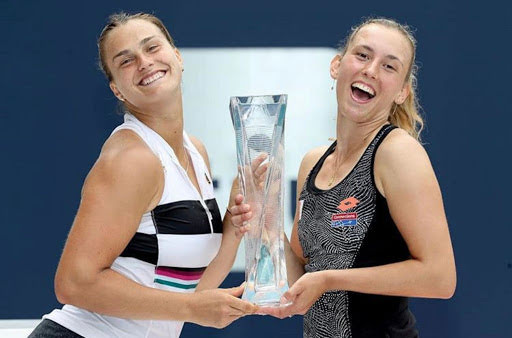