LUGANO, Switzerland -- No.2 seed Elise Mertens of Belgium won her second title of the year on Sunday, defeating Belarusian teenager Aryna Sabalenka in the championship match of the Samsung Open presented by cornèr, 7-5, 6-2.

"[Sabalenka is] very powerful and also has a great serve, so I tried to keep my balls deep and as aggressive as I could," Mertens said to the press, after the match. "I kept her moving and tried to play my game, always trying to keep one more ball in the court."

The 22-year-old Belgian had to survive various stumbling blocks en route to her triumph, contending with a rainy week which saw her fight through a challenging match against the defending champion Marketa Vondrousova in the second round, and win back-to-back three-set matches the day prior to the final.

The World No.20 prevailed, and now has three WTA singles titles to her credit, as the two-time and reigning Hobart International champion picked up her first trophy outside the hardcourts of Tasmania with an 84-minute victory over the hard-hitting Sabalenka.
“So many games were 40-40 and it could have gone either way," said Mertens. "But I’m really happy that I pulled through yesterday and the day before, because these weren’t easy. It was a great match today and I hope everyone here today liked it!"
Mertens played a tidy match, with nine winners and only seven unforced errors, and broke the Belarusian four times. The fiery 19-year-old Sabalenka hit 24 stunning winners, including three aces, but those were negated by 35 unforced errors.
A tight first set saw the powerful Sabalenka go toe-to-toe with the fleet-of-foot Mertens. The Belarusian was anxious to claim her first WTA singles title, after falling short in her only previous final, against Maria Sharapova in Tianjin last year.
Mertens, though, took the initial lead, using her exceptional defense to fluster Sabalenka and pick up a 3-1 advantage. However, Sabalenka rebounded, reaching 3-3 by breaking the Belgian at love with tremendous groundstrokes, including a thunderous backhand down the line to force an error for the break.
Despite that stumble, it was the Belgian who was holding more handily in the opening set, and Mertens kept pace, moving through to 5-5 with minimal fuss. The stability of Mertens proved crucial when Sabalenka faltered in that game, dropping serve at love with a backhand into the net. Mertens quickly clinched the one-set lead in the next game.
Sabalenka put herself in a dire position to start the second set, double-faulting to give Mertens a second break point in the opening game, which the Belgian grabbed after a backhand by the Belarusian flew wide. The early deficit sealed Sabalenka’s fate, as Mertens never faced a break point in the second set.
Mertens picked up an additional break at 4-2 with a divine backhand passing shot for a winner, and excitedly raced to the change of ends with another title in sight. Serving for the championship at 5-2, the Belgian needed only one match point to close out the victory over the World No.61.
“I’ve been practicing a lot – on court but also off court," Mertens continued. "I’ve got a good team around me. This week my dad’s with me, my dad – who doesn’t come with me that often. It’s really great to make a bit more family history here, because my grandparents actually had their honeymoon here many years ago!”
Later on, Mertens and Sabalenka saw each other as opponents again, as they faced off in the Lugano doubles final, partnering their respective compatriots Kirsten Flipkens and Vera Lapko. Team Belgium prevailed 6-1 6-3. It's Elise's second doubles title of the year, and fourth in total. 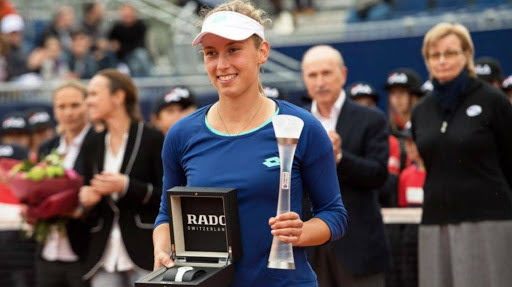