Elise Mertens hoists a championship trophy in Australia once again, as the Belgian defeats Kaia Kanepi for her sixth career WTA singles title.

After two runner-up finishes in 2020, Elise Mertens is back in the winner’s circle Down Under.

"The first tournament I played this year, so I'm very happy about the result, the way I played," Mertens said during her post-match press conference.

In their last clash, at Roland Garros last year, Mertens needed to go all the way to a final-set tiebreak before quelling Kanepi and leveling their head-to-head at 1-1. This time, the top Belgian needed just 68 minutes to grab her first title since triumphing in Doha nearly two years ago.

World No.20 Mertens had four more winners than Kanepi (18 to 14) and converted all four of the break points she held during the match.

Mertens won her first WTA singles title in Hobart in 2017, defended that crown the next season and went on to reach her first Grand Slam semifinal weeks later at the 2018 Australian Open.

"[Kanepi is] definitely a big hitter," Mertens said. "When the first serves go in, you have to make the returns to let her play. That's what I did. I didn't give a lot of free points, so that's always good against her. You know, get that one ball back, let her play the game, get the balls back, but also try to, if you have the chance, attack."

Kanepi, who at age 35 was the oldest player in the draw, was unable to win her fifth WTA singles title. An early break culminating with a divine backhand winner down the line helped Mertens zip ahead to a quick 3-0 lead, she was unable to serve out the set at 5-3 as Kanepi powered to a break of her own. Mertens, though, came out on top in rallies at the end of the opener to seal another break and claim the one-set lead.

Mertens collected six straight games as she cruised to a 5-0 lead in the second set, punctuating that run with an ace to bring herself to match game. Kanepi got on the scoreboard and was able to swat away Mertens’s first match point at 5-1, but the Belgian converted her second chance with her fifth ace of the day. 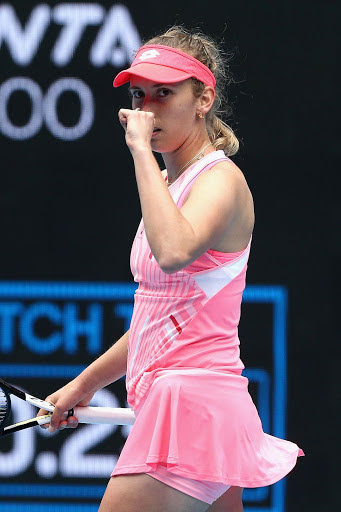