Belgium have retained their place in Fed Cup by BNP Paribas World Group after Elise Mertens defeated Sara Errani 63 61 to clinch victory over Italy, then Mertens combined with Kirsten Flipkens to outclass Deborah Chiesa and Jasmine Paolini 61 64 and finish the tie with a 4-0 triumph on the red clay courts of Genoa.

Early on against Errani, Mertens, whose favourite shot is her serve, found her composure severely tested as five of the nine games in the first set fell the way of the receiver. Not until the second set did Mertens finally resembled the player who stormed to the Australian Open semifinals. She stepped well inside the baseline to return Errani’s serve after abandoning the tactic in the first set. She hit harder. She punctuated every winner with at least a fist pump, at most loud, earthy bellows to her team and the small but loud Belgian fans, along with all their percussion instruments.

After breaking for 63 3-1, Mertens fittingly sealed the tie with a whistling forehand return winner to capture a third victory for Belgium and retain their spot in the World Group for 2019.

Mixed in with the joy and satisfaction of remaining in the World Group was a feeling of relief for Mertens, and she highlighted the calm she played with through the anarchy of the first set.

“I’m a little bit tired,” said Mertens. “I mean there are a lot of emotions but I’m very happy that I’ve got the third point for Belgium. I just concentrate on my own thing, don’t be nervous. Just play. You can play a lot of aces and winning points on the serve.”

“I think I’m [particularly] happy about my game today, I think it’s better than yesterday more aggressive. I played some big points. She’s a good runner on court, she gets everything back, so I’m really happy it went my way.”

Errani was visibly upset after her second defeat of the tie, and she pinpointed to nerves and tension that kept her from finding her best level.

“I think she was better than me of course, level of tennis was much higher. Her game. So, I couldn’t play my best,” she said.

“I don’t know. I’m sad about how I played my level and everything but it’s like this, I can’t change it anymore. Coming from yesterday, a lot of tension. To play good you need to be focused, and relaxed on your body. It was really tense on your muscles and it’s difficult to play like that. That’s tennis.”

Despite the 4-0 whitewash, there were still positives to take home for the Italians. One word the Italians, represented by such an inexperienced team, have constantly spoken is “experience” and it was uttered again by Errani as she reflected on the defeat.

“Jasmine did a great job yesterday,” she said. “It’s one week more. It’s experience. Tough one of course but it cannot be always the best.”

Captain Garbin concurred, punctuating her speech with a wide smile.

“It was a great week,” she said. “We worked very hard for the team. The best thing is our team is very close and I think it’s very helpful for the girls to improve with each other, to help each other. And I see a very good doubles - it’s the first time they’ve played together. They had a very good result for me today.”

Instead of resting after clinching two of the three singles rubbers of the weekend, Mertens shrugged and returned to the court almost immediately alongside Kirsten Flipkens. The pair proved a class apart from Italians Jasmine Paolini and Deborah Chiesa, cruising to a victory that was an ominous reflection of Mertens’ hunger for future success in the Fed Cup.

“I love to play for Belgium and every match I can play for my country is something special,” she said, laughing at the idea of rest. “For me, it doesn’t matter if it’s 3-0 and 2-2, I’m just going to give it my all. Of course you want to win every match.”

Belgium, Fed Cup champions in 2001 during the era of Justine Henin and Kim Clijsters, will compete in the World Group for a second consecutive season for the first time since 2012. 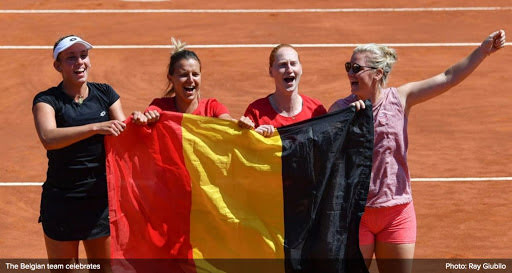