Top seed Elise Mertens surged to a third title in 2018, defeating resurgent Aussie Ajla Tomljanovic, 6-2, 7-6(4), to not only win the Grand Prix de SAR La Princesse Lalla Meryem and extending her match-winning streak to 12 in a row.

"You get confidence from winning this many matches, but you have to take things match by match," she explained after her win. "Every opponent is different, and every match has to be played. But I'm really happy that it's going well so far. Winning my third title of the year feels amazing."

Mertens is yet to lose a match on clay this season, capturing the Samsung Open presented by Corner in Lugano and leading Belgium to a winning weekend over Italy in Fed Cup. Taking on Tomljanovic, a former World No.47 who was in her first final since 2015, Mertens was in control until taking a set and 5-3 lead, when the Aussie saved a championship point to force a tie-break.

"In the first set, I was really dominating, and she made more mistakes than I did. I started really well in the second set, but there were so many deuce games, so it could have gone either way. I had that match point, but she put it on the line, so it was like, 'Ugh!' but I was really happy to win it in two sets."

The 22-year-old kicked off 2018 with a run to the Australian Open semifinals, and showed some of that form when she needed it most, racing out to a 5-1 lead in the ensuing sudden death and didn't look back to secure victory on her third match point after one hour and 45 minutes on court.

"The consistency of my game has really improved. I'm mentally there and physically ready to play, so the consistency has been a good thing.

In all, the Belgian kept her stat sheet clean, striking 18 winners to 15 unforced errors, winning 76% of points behind her first serve and converting four of 11 break point opportunities.

"The conditions were certainly better here than in Lugano," Mertens joked, thinking back to the rainy week and subsequently impacted schedule. "Every country has its own beautiful things, but the people in Rabat are really nice, the courts and hotel were great. Nothing to complain about!"

Tomljanovic took far more risks on Saturday, and while she was ultimately undone by 46 unforced errors, the 24-year-old nonetheless can take heart from a successful week in Rabat that will see her rise back into the Top 80 for the first time since 2016.

"I'm definitely not holding the trophy I wanted this week, but there were a lot of little victories I'm very happy with," Tomljanovic said during the trophy ceremony. "You guys made this tournament special," she said, addressing the crowd. "It was my first time in Rabat, but I definitely hope it's not the last."

As for Mertens, her ranking continues to climb, up to a new career-high ranking of No.16, but has no time to rest with a first round against countrywoman Alison Van Uytvanck awaiting her in Madrid tomorrow.

"I'm heading to Madrid in a half hour. It's going to be a tough one, but I'm ready to play, and we'll see where it ends.

"Even when you win a tournament, there's always another one the next week, so it's important to take things match by match." 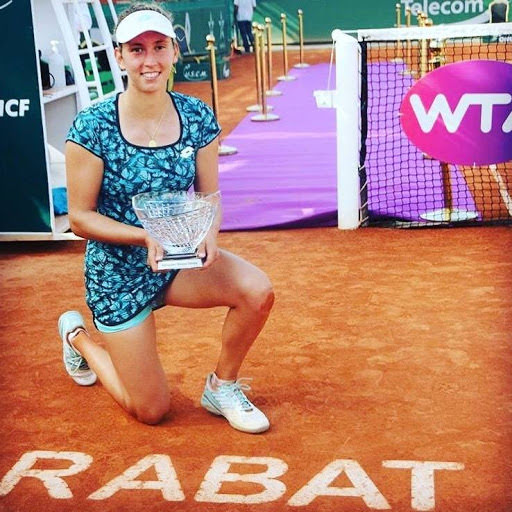