WUHAN, China - No.6 seeds Elise Mertens and Demi Schuurs captured their biggest title together with a 6-3, 6-3 defeat of No.2 seeds Andrea Sestini Hlavackova and Barbora Strycova in the Dongfeng Motor Wuhan Open final - and in so doing, clinched their place at the BNP Paribas WTA Finals Singapore presented by SC Global.

It is the Belgian-Dutch duo's fifth trophy as a team, fourth of the season, and first above International level. Schuurs, who extends her Tour-leading 2018 title count to seven, was already a double Premier 5 champion, having taken the Rome and Montréal crowns alongside Ashleigh Barty, but Wuhan marks a debut title at this level for Mertens.

For Sestini Hlavackova and Strycova, their second loss to Mertens and Schuurs in as many meetings this year also marks the partnership's second straight runner-up finish in the Asian swing, following last week's defeat at the hands of Miyu Kato and Makoto Ninomiya in the Tokyo final.

The Czech pair came out off the blocks slowly, with the Strycova forehand letting her down twice to go down an immediate break and Sestini Hlavackova double faulting to concede another. By contrast, Mertens and Schuurs were disciplined and aggressive, the latter seeking to make her way into net wherever possible and the former repeatedly strengthening their position with pinpoint lobs.

The World No.9 would also show off her spectacular reflexes on a number of occasions, particularly in her ability to get the most powerful of smashes back into play - a skill that increasingly frustrated the New Haven champions, with Sestini Hlavackova's overhead in particular falling into disarray as the match progressed. The 32-year-old would send one into the net to bring up the first set point for their opponents, swiftly taken when a Strycova lob drifted long.

Though Schuurs dropped her opening service game of the match, thereafter the Hobart and 's-Hertogenbosch champions would protect their deliveries with maximum efficiency, facing only two further deciding points in the match. This freed them up to make inroads on the Czech serves, and though Strycova dug herself out of a 0-40 hole with strong serving in the fourth game of the second set, another errant Sestini Hlavackova smash would put them in danger again two games later. This time, a firm Mertens volley ensured only one break point would be needed to take the lead.

As the Belgian served for the title, the Czechs - who had already clinched their spot in Singapore by making the final - raised their games in a bid to keep their hopes alive. A nailbiting down-the-line rally between Strycova and Mertens was eventually taken by the 22-year-old; a brilliant Sestini Hlavackova cross would save a first match point, but an emphatic Mertens smash would seal the championship on the second. 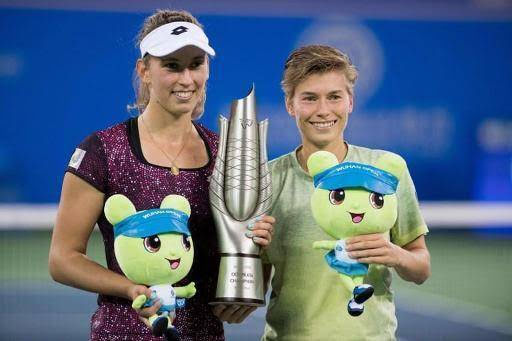