Opening the play-off for her nation, Mertens saw off a spirited performance from Jasmine Paolini to give Belgium the lead. Mertens was back in action in the third rubber, against Italian No. 1 Sara Errani. Another straight-sets win clinched the tie for Belgium.

Not one to rest on her laurels, Mertens was back in action in the doubles rubber, recording yet another straight set victory alongside Kirsten Flipkens, sealing a 4-0 whitewash for the Belgians.

Mertens has an excellent Fed Cup record since making her debut in last year’s first round. She was won six of her seven singles rubbers, with her only loss coming against Kristina Mladenovic in the first round this year, and she holds an 8-2 win-loss record in the competition overall.

The other nominees from the World Group and World Group II play-offs will be announced throughout this week.

Voting for the next instalment of the Fed Cup Heart Award opens on Friday 29 June, and the winners will be announced on Friday 6 July. 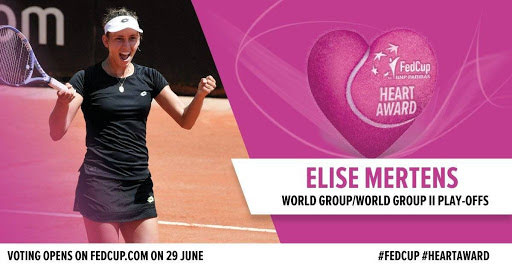