The WTA announced today that Elise Mertens has become the new WTA Doubles World No.1 as of May 10, 2021 for the first time in her career.

The Belgian becomes the 45th woman in the history of the WTA to achieve the elite ranking spot, and the second from her home country after Kim Clijsters, who first reached the top spot on August 4, 2003 and held the No.1 doubles ranking for a total of four weeks.

"I am very happy to become World No.1 in doubles. It is definitely a dream come true," said Mertens. "I would not have made it without all of the incredible partners I’ve played with, and of course my team, so I want to thank them for helping me get here. This is a moment I will cherish forever."

Mertens earns the WTA World No.1 doubles ranking after capturing two doubles titles this season, including the Australian Open with Aryna Sabalenka – their second career Grand Slam doubles trophy as a team – and most recently at the TEB BNP Paribas Istanbul Championship, partnering with Veronika Kudermetova.

Istanbul marked the Belgian’s 12th career WTA doubles title, with her other notable trophies captured at 2019 BNP Paribas Open (Indian Wells), Miami Open presented by Itaú and the US Open (all with Sabalenka). That same year, the pair qualified for the Shiseido WTA Finals Shenzhen for the first time.

Mertens overtakes the top doubles ranking from Hsieh Su-Wei, whom she partnered with at last week’s Mutua Madrid Open. Hsieh first achieved the No.1 doubles ranking on May 12, 2014, with further stints across 2020 and again earlier this season, bringing her career total to 44 weeks.

"Through her hard work and dedication, Elise has earned her place among the elite with the coveted WTA World No.1 doubles ranking," said Steve Simon, WTA Chairman and CEO. "Congratulations to Elise on achieving this incredible milestone and we look forward to witnessing more successes throughout her career."

Mertens has also enjoyed success on the singles court, capturing a total of six WTA singles titles including one in 2021 at the Gippsland Trophy and an additional final at TEB BNP Paribas Istanbul Championship. She won the biggest singles title of her career in 2019 at the Qatar Total Open (Doha), where she outlasted Simona Halep in the championship match and in 2020, she was the match wins leader, posting a 34-13 record overall. 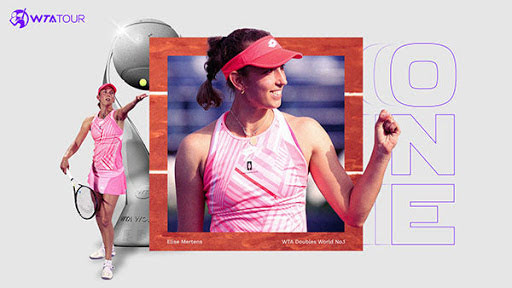