Doubles crown for Elise and Sabalenka at Ostrava Open

Elise and Aryna Sabalanka, the top seeds, met the unseeded duo of Gabriela Dabrowski and Luisa Stefani in the doubles final at the Ostrava Open, which ended with a victory for the Belgian and Belarusian 6-1, 6-3.

Mertens and Sabalenka were into their first doubles final of 2020 after a stunning 2019, in which they won the US Open and swept the Sunshine Swing titles at Indian Wells and Miami. Those three titles were the sum total of Sabalenka's WTA doubles trophies, while Mertens had nine WTA doubles titles to her credit thus far, adding one more to both their names on Sunday.

Both women did great in singles as well, with Elise reaching quarterfinals, and Sabalenka winning the first all-Belarusian WTA final over former World No.1 Victoria Azarenka to win her seventh career title.

"Aryna's really playing well this week, in singles and doubles!" Mertens said after the final. "We played at a consistent level this week, especially in the final. She's the hard-hitter, and I'm the one with the hands! We both give 100% in doubles even if we're still in the singles, so that's why we do well."

"We did well this year, but we hadn't won a trophy yet," Sabalenka added. "It was really important to us to win one, and we had such amazing energy together. Hopefully, there's many more to come!

"We're young and strong, and we can handle both singles and doubles!" 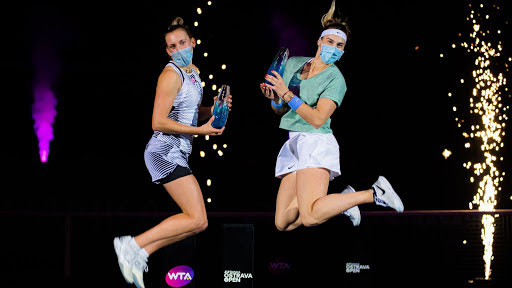